Our director and a volunteer went to a 2013 puppy mill auction here in Iowa. Read the amazing story below.

Our Puppy Mill Experience in Iowa 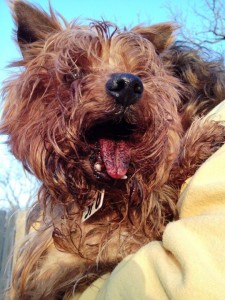 Susan and I got up early Friday morning to embark on a three hour drive to Kalona, IA. I was excited, yet hesitant to finally see what all the drama was really about.

When we arrived at the Amish farm, the sun was shining, but there was a chilly wind blowing from the south. Up on the hill was a food tent alive with activity. Amish women scurried around getting food and hot chocolate for the event participants. Amish children ran back and forth in a game of tag, while the teenage girls sat atop the picnic tables with their vibrant royal blue and deep purple skirts billowing in the wind. The scene was right out of movie.

Across the way, the sale tent was teaming with Amish men and boys getting ready for the big sale, while buyers milled about the trailers looking at the “merchandise.” Once we registered for the auction and received our bid numbers, we too went to view the “merchandise”.

The first step into the trailer literally took my breath away. I had seen photos, but it was quite different to see it in person. When viewing photos you simply cannot fathom the stench of ammonia, urine and feces that stings your nose and causes your eyes to water. Within minutes I couldn’t decide if it was the ammonia making my eyes water or the simply tears that I was fighting back as I stared througj the bars at the sad, scared “merchandise” huddled in the corners of the cages in groups of four or five, as if there were safety in numbers. Sadly, their safety and well-being was the last thing on the minds of the puppy mill breeders who were there to purchase more stock. How in the world terrified dogs and puppies can be considered livestock is completely and utterly baffling to me. I wanted to scream and cry and make a scene, but I had to put my emotions aside and say nothing if I wanted to get dogs out of there. It wasn’t until that moment that I understood why rescues would purchase dogs from puppy mills and put money into the pockets of these heartless people. Suddenly, I was ready to spend every last dime I had to save as many as possible.

We situated ourselves on the stands in the sale tent, strategically placed so we could see the other rescuers in the crowd, to prevent bidding against each other. It didn’t really matter which dogs we wound up with. What mattered was that we wound up with more dogs than the breeders. Armed with my checkbook and bidding number, we commenced the bidding war between rescue and breeder. Thinking my heart couldn’t possibly break more for these sad creatures, I watched as the auctioneer held up a visibly shaking Chihuahua and said, “Who wants to start the bid on this ’09 model?” Gulp! An “09 model”? Good God! How can these people devalue a living thing like this? Several Chihuahua’s later, a 12 year old, possibly pregnant, blind Shih Tzu with big, bulging, dried out eyes was presented as an “older model, but still has plenty of good years left in her.” Four hundred and sixty-five dollars later, the Amish man across the room gave up and she was mine! One of the proudest moments of my life!

One after another, breed after breed, the dogs were placed on the auction table throughout the day. The longer we were there, the more determined we were to outbid the breeders. Attending were numerous rescue women who had scraped together donations, took out loans, and drained their own bank accounts to free as many dogs as possible from a life of hell in the puppy mills.

I wish my story ended here, but there was another auction the next day, in the town of New Sharon. I wanted to cry on Friday, but now I mistakenly thought I was ready to do battle and knew what to expect this time. HA! As I walked to this sale tent, the motion picture scene from the day before had turned into a scene from Deliverance. I walked into hell on earth and came face to face with evil in a man, named Powell, notorious puppy miller and sex offender.

Powell did his best to escalate bidding whenever rescues were bidding on dogs in an attempt to bankrupt the rescues. After outbidding one rescue for a very sad-looking, old Maltese, he turned to the Amish man next to me and said, “I don’t even want that damn thing. I just didn’t want that rescue to get it.” I dare not imagine the fate that befell that poor dog later in the evening.

Like the day before, there were tufts of fur and bones peeking out of the top soil, sporadically littered across the farm, where little dog bodies were left like garbage to decompose and disappear as if their lives had no meaning. Like the day before, the stench inside the buildings stung my nose and caused my eyes to water. The only difference was the buildings here were even worse and it was hard to keep from vomiting. There were so many hundreds of dogs living in such horrific conditions that my mind was almost paralyzed trying to comprehend, or justify, or make any kind of sense as to how this could possibly be allowed in the state of Iowa, by the USDA, and just the simple laws of humanity and our innate sense of right and wrong.

At the end of the day, “victory” went to the rescues! More than ½ of the “stock” made it to rescues. The dogs still have a few things to endure. All will have most of their teeth pulled because they are so rotten. The majority will be treated for ear mites and infections. Some will have treatment for eye infections, dry and bulging blind eyes. Some, like my little Yorkie with a broken, dangling lower jaw, will be purposely injured before being handed over to rescue. BUT, those dogs will finally know what it is like to be clean, to be healthy, to be healed, to have nutritious food, to drink clean water, to walk on solid ground for the first time instead of standing on wire cages, to be touched by a human without being hurt, to be loved for the first time, and to just be a dog.

AHeinz57 Pet Rescue & Transport saved a total of 18 dogs from the two auctions. However, I am left wondering what we accomplished. I am left wondering why the people that we pay with our tax dollars to ensure the humane treatment of animals, allows this to happen. Where were they during these auctions? Where are they now? Do they care? Are they paid to turn a blind eye? Why do we vote for these people? Why isn’t the world as outraged and destroyed as I am over this? I don’t sleep well now. How do they?

PLEASE contact your legislators and tell them to STOP puppy mills. Shut them down and do not allow them to sell out to other breeders.

It is up to me and it is up to YOU to do the right thing and be a voice for puppy mill dogs.

How can we STOP Puppy Mills?

If your heart is set on a specific breed, adopt from a breed specific rescue or at least research the breeder you want to buy from.

Educate yourself to be certain you are not buying from a puppy mill:  What should I look for?

Get involved: Join Iowa Voters For Companion Animals or What Can I Do To Stop Puppymills?