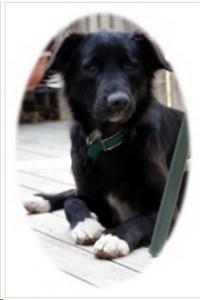 On March 22, 2008, the day before Easter Sunday, I saw a little red truck that was pulled off on the side of the on-ramp to I-80 from 169 in DeSoto. There was a dog near the truck, so I started to pull over to help, thinking the guy in the truck was trying to help the dog. But, when I pulled over the truck took off really fast. The dog tried to follow it, but then ran off up the hill by the interstate. I tried to get the dog to come to me, but she just kept running. I thought she had ran into De Soto because I couldn’t see her anymore, but two days later I saw her again just sitting on the hill watching the cars and waiting for her owner to return. I parked my car and again tried to get her to come to me, but she ran off again. She was only running on three legs and I was very concerned about her being out in the elements with no food and a possible broken leg, so I brought food back and put it on the hill where I had seen her sitting.

For several days after that I made numerous drive-bys many times a day. I had almost given up on her because I hadn’t seen her for awhile, but then one morning on my way to work during a horrible thunderstorm, I saw her sleeping under the bridge. So, once again, I parked my car and climbed through the weeds and mud to try to get her and once again she ran away. I quickly drove over to the Kum & Go, bought dog food and a bowl, and ran back home for a blanket. I drove back to the interstate and climbed up under the overpass and put the blanket and bowl of food where she had been sleeping. It was so sad to know she was still out there waiting for her owner to come back for her.

By March 31st, I still had not been able to lure her to me. I knew she wouldn’t be able to survive very long in that area with her injured leg, so I called my vet who referred me to the Animal Rescue League of Iowa. Reluctantly, I called the ARL and asked that IF they would PLEASE help me catch her, I would take care of her. Because they were a “traditional” shelter and my preconceived notions about “kill” shelters, I assumed they wouldn’t go out of their way for this dog. But, to my surprise, they readily agreed that she needed help and had no problem providing a live trap, as well as people to help monitor the trap.

On April 1st, the live trap was put in place and I prayed and prayed that it would work. It snowed a little bit earlier that day, so I was hoping she would take refuge in the trap. That night, while monitoring the trap, I spotted a state patrolman at a nearby gas station. He was visiting with a police officer and a County Sheriff. I informed them about the dog and gave them my phone number in case they saw the dog. The State Patrolman said he had received a call about an injured dog near the interstate and his intentions were to just shoot the dog if he finds it. I begged him not to shoot her and explained that I had all kinds of resources in place standing by ready to care for this dog. He just looked away and started talking to the police officer. I became quite upset and threatened that NO ONE had better shoot MY dog.

On April 2nd, I received a call stating that the trap was gone and the Department of Transportation took it. This situation, combined with my fear of the state trooper getting trigger happy, prompted me to call the State Patrol Headquarters and raise holy heck about shooting an innocent dog and the removal of the trap. After a very lengthy chewing out, they agreed that no one would shoot the dog, they would inform me about any calls they receive about the dog, and they offered to contact the DOT for me about the trap. They called back a few minutes later and said the DOT didn’t take the trap; the city took it. So, I called the Mayor and raised heck with him, demanding that he authorize us to put the trap back. The Mayor was very nice and agreed to my demands. 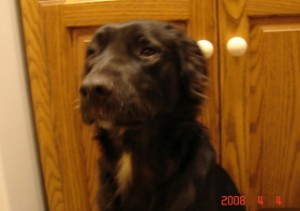 On my way home that night, I spotted the dog poking around the trap and then backing away. I prayed that she would go back to the trap. Then she went back, poked her head in and then quickly backed up and ran up the hill. So, I prayed again that she would go back into the trap. She came back, took a few steps into the trap and then ran back up the hill and disappeared. I had a feeling we were going to be successful that night, so I loaded up the trap with left-over Easter ham, parked nearby, and spent the evening sitting and praying on top of my car with binoculars.

At 11:30 p.m. I finally got too cold and went home to warm up and get a little sleep. Before I went to sleep, I set my alarm and prayed again. Thinking I should be more specific, I prayed that she would came back to the trap, put her whole body into it and the door would shut securely. My alarm went off at 2:00 a.m. and I got up to check the trap. My prayers were answered! The dog was in the trap and started barking like crazy when I shined my spotlight on her.

I quickly parked and approached the cage, concerned that I had just caught a rabid dog because she was going crazy! But, I knelt down beside her, talked softly to her and fed her lunch meat through the bars while I waited for my son to come with the truck.

We brought her home, fed her, and gave her lots of water. I made a bed for us on the floor of my laundry room and as soon as I laid down she snuggled right in under my arm and slept soundly.

My veterinarian opens at 7:30 and I wanted to get her medical attention as soon as possible. It appeared she had a fractured knee on her left rear leg and her hips were in bad shape. Dr. Rohret referred us to a surgeon who specialized in leg injuries. She got all her shots and was treated for whipworm. I brought her home that evening and began the process of introducing her to my four dogs.

I had been worried about how I was going to pay for everything, since I had plenty of my own medical bills to pay, but an incredibly nice and generous man called me that day and offered to help me with her medical care. I would have figured out how to pay for everything, but it would have been difficult, so I can’t begin to express how grateful and blessed I felt after talking to him.

On the way home, I drove past a sign for Grace Church which made me think of how God’s grace was in this adventure in so many ways. That’s when I knew her name should be Grace.

On April 8th, I took Gracie to see Dr. Reimer. His exam showed that she had 3 broken bones in her foot, a small tear in her knee, and she has pretty bad hip dysplasia for such a young dog. However, none of it required surgery at that time and the hip dysplasia could be managed through weight control and glucosamine supplements. Her foot and knee were wrapped up in a splint and she was able to come back home with me.

Since I already had four dogs, my first thought was that I would finally start-up my own animal rescue and find Gracie a good home. I also had the option of placing her in foster care, but I think Gracie actually became my dog the day I saw her dumped by the interstate and was reinforced when the state trooper said he was going to shoot her. She has quickly become part of the pack, part of the family, and part of my heart.

So many people keep telling me how great it is that I helped Gracie, but it took a lot of people and a lot of faith to save her. In some ways, Gracie helped us. She brought out the best in so many people…the Mayor of DeSoto who helped even though I yelled at him; the DeSoto Police Officer that offered to help monitor the trap at night; Dan (DeSoto city employee) for offering to help me; the folks at Cowboy Up and Right Turn Pet Food Store who kept an eye out for Gracie; the folks at Kum & Go who were so nice to me when I was buying lunch meat, dog food, and caffeinated beverages late at night; my son, Lucas, who also did drive-by’s for me, helped with the trap, and got up at 2:00 a.m. to help me bring Grace home; Dr. Rohret and Dr. Reimer who gave Gracie more help than they charged me for; my boss who was so tolerant of me coming in late many mornings with muddy shoes after chasing a dog in the rain; the ARL who provided the live trap and assisted in Grace’s rescue; and Hull’s Haven Border Collie Rescue in Canada who held a foster spot open for Gracie (although I kept her!) and Sally Hull provided much needed emotional support and encouragement for me when everyone else was telling me I was crazy and should give up. But, most importantly, Gracie helped renew my faith in God and goodness of people. 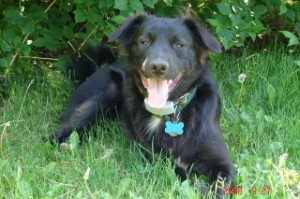 UPDATE 8/5/2013:
After five and a half wonderful years, our Amazing Grace died of renal failure. She was a scrappy, independent girl. It took her 4 years to actually enjoy a kiss on the top of her head. She wasn’t a cuddly dog, but she was a very loyal, happy girl despite the serious look on her face most of the time. She grumbled when waiting for a treat and would only come when called if you called out, “BULLET.” Then she would race like the wind to come to me. She was so quirky and only liked to be pet for a minute, but loved to be at my side. Gracie may have been one man’s garbage to be tossed out his truck, but she was my little treasure and inspired so much good in this world for other homeless dogs. She completely changed my world and I will be forever grateful that she was in my life.

“By the love of those I’ve been privileged to rescue, I have been rescued.”
Annette King- Tucker